This is the first snow report from April! We are just a week away from the end of the season!

It’s already spring and despite the forecast predictions, there was no big snowfall in the mountain. There is no new fresh snow in most parts of the mountain and the temperatures were above 0°C during the whole week. Of course, the results were seen immediately: the snow cover is melting, there are more and more black spots, especially in the lower parts of the mountain.

Up in the mountain, the conditions are still good!

However, the conditions on the very top remain good, especially in the early mornings. There was some snow on the top this afternoon, which will hopefully help. If you want to enjoy better ski conditions, it’s essential to wake up early and be one of the first on the slopes. In the afternoon, the snow is already too slushy. After 2 p.m. the conditions usually are incompatible with skiing above the low quality.

Still, we can hope for some snow tomorrow, as some “bad” weather is coming from the West, but the chances are not big. Other snowfalls are not expected during the whole week. Temperatures will keep on getting higher, snow will continue to melt. Winds are not expected. Spring is slowly coming and it looks like the mountain can’t do anything, but give up! 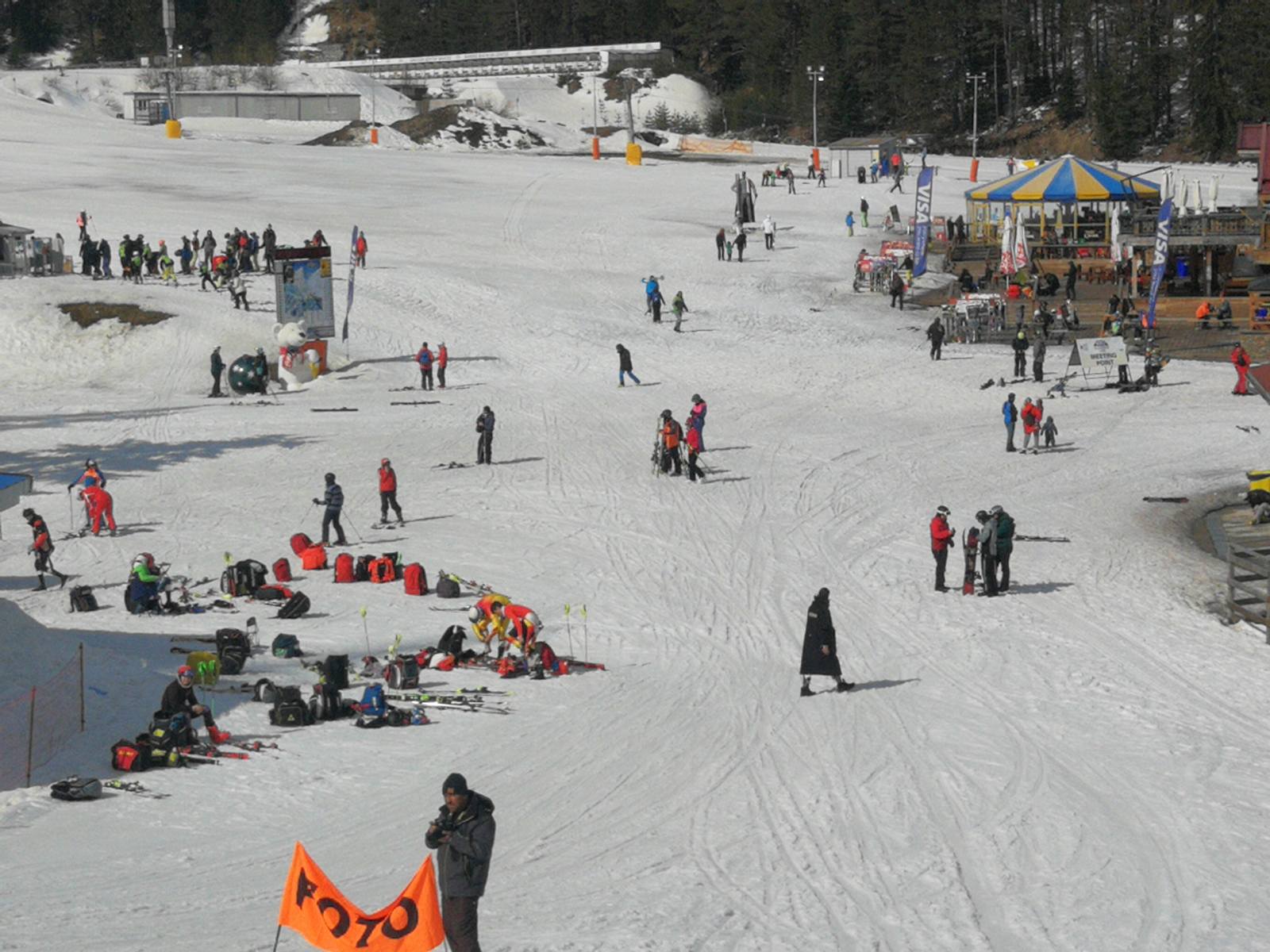 The lower part of the mountain however starts to melt!

In the town of Bansko, there is no snow. The ski road is torn at places, so skiing back is not recommended. The melting impairs the quality of skiing up in the mountain, but at least it’s still possible to ski.  The official website of the resort still reports between 160 and 230 centimeters of snow above the mountain.

The busiest day for the week was not Saturday, but Monday. There were many new tourists coming from abroad, but most of them came for 3-5 days.

The lifts to the top are the busiest ones.

As usual, many Bulgarians also headed to the resort during the weekend. There was not much waiting time in the morning at the gondola, but there were at least 10 minutes waiting time at Banderitza 2 and Plato lifts. The other “long” waiting time for waiting is 10-15 minutes for a beer in one of the bars in the mountain. Apart from that, the resort looks busier than through most of the season.

The parking lots around the bottom gondola and at the top gondola look almost full during the day. Restaurants and cafes look also busy. Just a quick reminder, they were allowed to re-open for customers if they operate an outside zone, with the distance between customers of at least 1 meter and following all safety measures given by the health authorities.

The slopes are busier, but the resort still looks empty!

All of the slopes, except Slope 8 Ulen, are operating. As previously stated, the condition of the ski road (especially down of Chalin Valog) is not good. Slopes are well-groomed in the morning, but the increasing temperatures have a big reflection on skiing in the afternoon.

The reason Slope 8 is closed is the kid’s competition that was taking place in the resort. This is another reason the zone looked busier.

A view from the baby lift at Banderishka Meadow.

Some skiers are joking that Shiligarnika and Banderishka Meadow are so warm already, that mosquitos are flying around the skiers. This is the reason there were not many people in this area. Most of them preferred to go higher in the mountain. The higher, the better.

Beginner skiers took advantage of that situation. It was very comfortable to stay in the beginner zone with average conditions and fewer people than go to the top where it’s “overcrowded”. Of course, the resort is far from crowding, but comparing the week to the weeks we had before, it was at least 2 times busier. 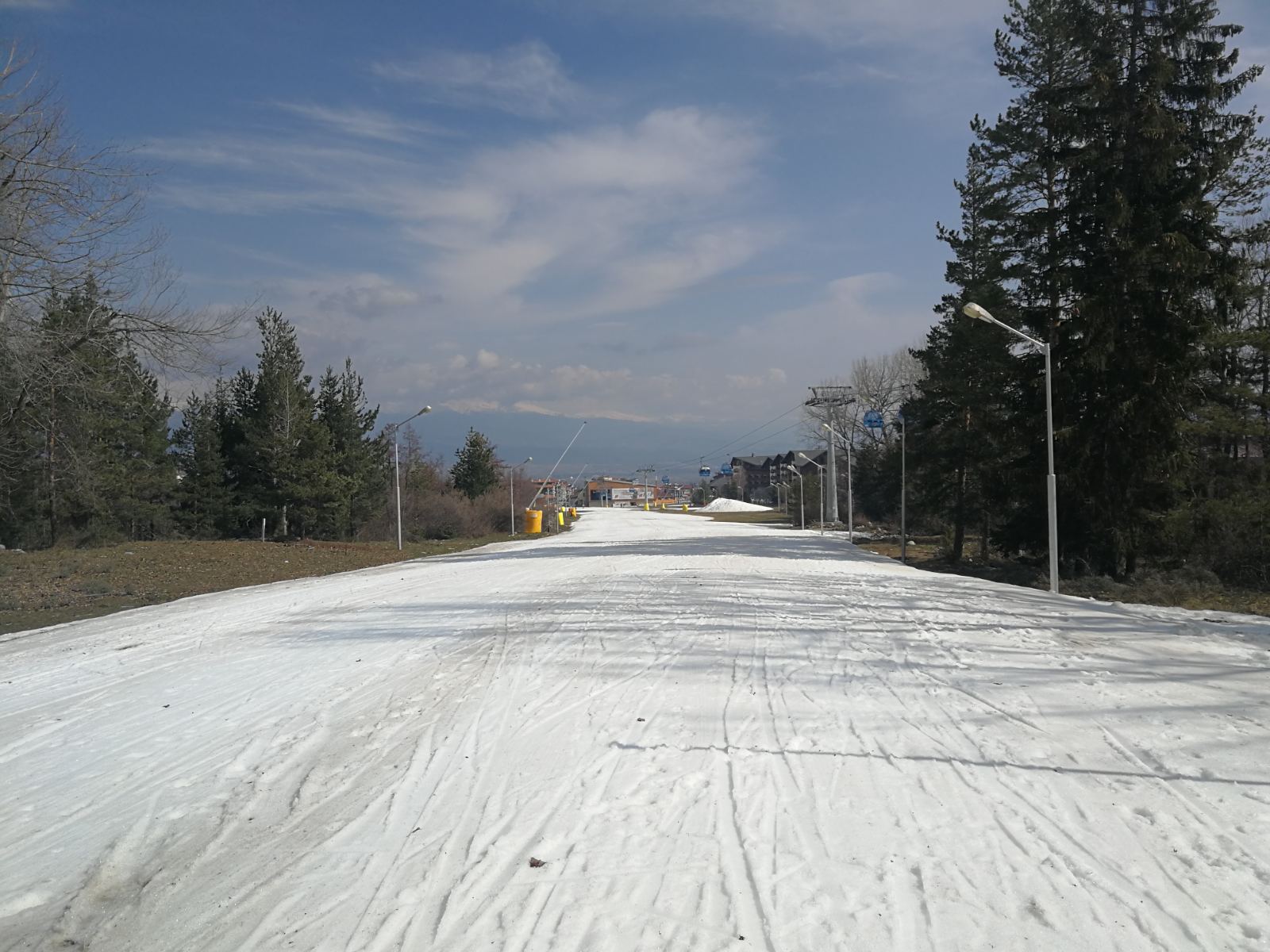 The end of the ski road.

I end the first April snow report, hoping that the weather will surprise us. Let’s pray the last week of the season will be good for skiing,