Dear March, welcome! It feels that the end of the season is getting closer, although it’s still not officially announced. The weather is sunny, but as previously reported, March always surprises us with big temperature amplitudes. One day it’s spring, the other feels like winter. And because of Women International Day, celebrated on the 8th of March, Bulgarian people say March is a women’s month. It changes the women’s moods. Therefore, I expect that in every snow report this month I’ll write about totally different skiing conditions.

The weather is sunny but still chilly.

The weather this week slowly becomes colder with each day. The winds were not strong with a maximum of 15 km/h on the top.  Some snowfall is expected next Mid-week, but it’s not expected to be more than 5-10 cm daily. On the very top of the mountain, at Todorka peak, the snow at the moment is around 200 cm. At Banderishka meadow, at 1620 meters, the snow is 140 cm. Here, in the town, there is no snow cover. The end of the ski road is however covered with around 50 cm snow.

Snow cannons are running when the temperatures allow.

Unfortunately, due to the high temperatures last week, the natural snow cover was not at a top-level. There were many black spots on the slopes. Thanks to cooling down, the resort management turned on the snow cannons and now skiing is back to the top level.

In the nearby located resort of Dobrinishte, where many skiers prefer to hit the runs due to the lower lift pass prices, the conditions below the mid-lift station are already incompatible for skiing. However, many Bulgarians still prefer to ski there instead of Bansko. 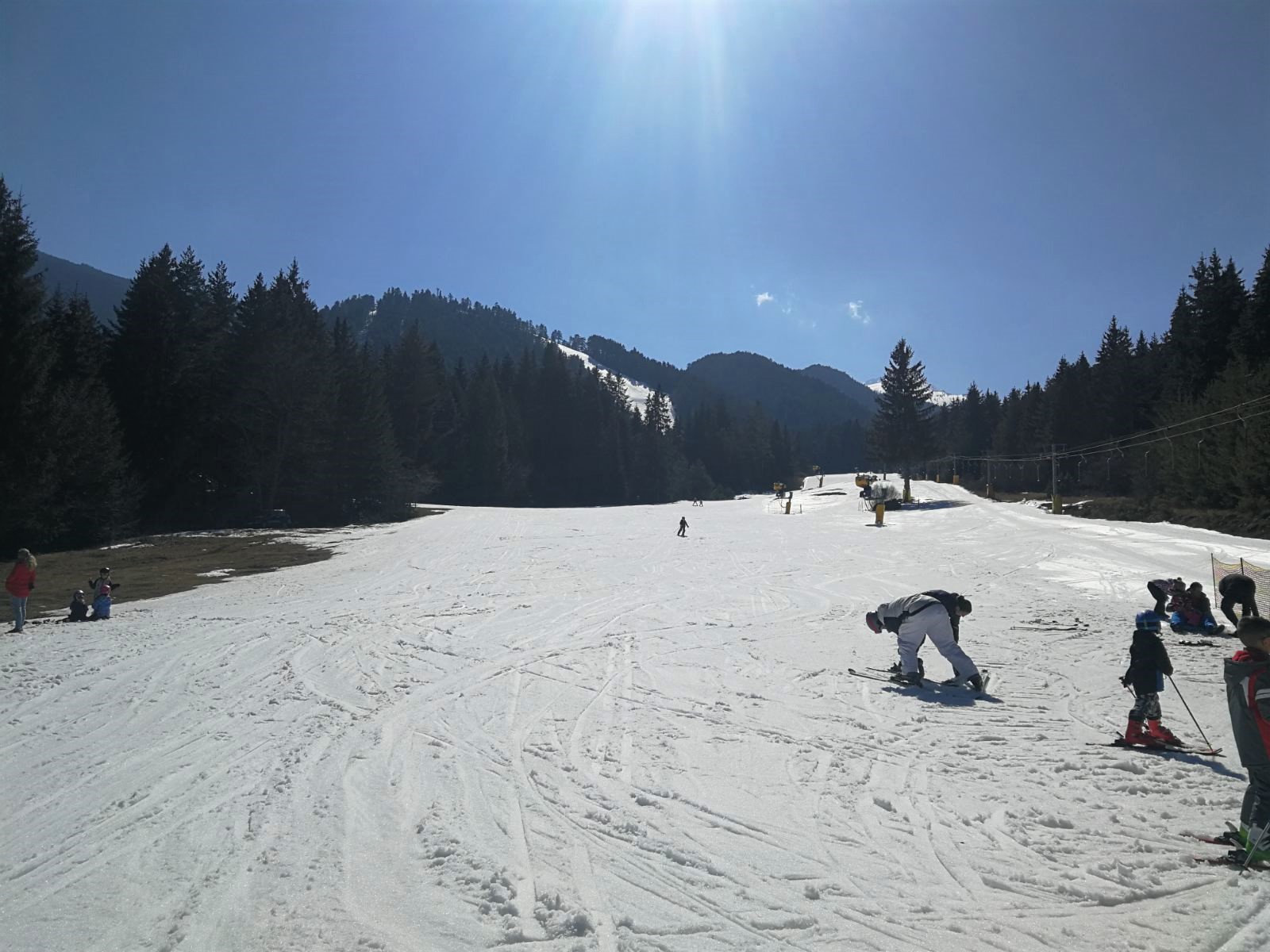 There are many spots in the lower part of the mountain also in Bansko, but snow cannons are helping much.

Back to Bansko, for the upcoming week, we are not expecting big weather changes. Therefore, the snow cannons will most probably continue to work, in order to accumulate enough snow mass for the upcoming warmer days by the end of March.

There were not many skiers during the week. Contrary to expectations, the opening of restaurants did not seduce more people to come to Bansko. Probably the more options for weekend activities that we have with the measures loosening, have put skiing in the background. 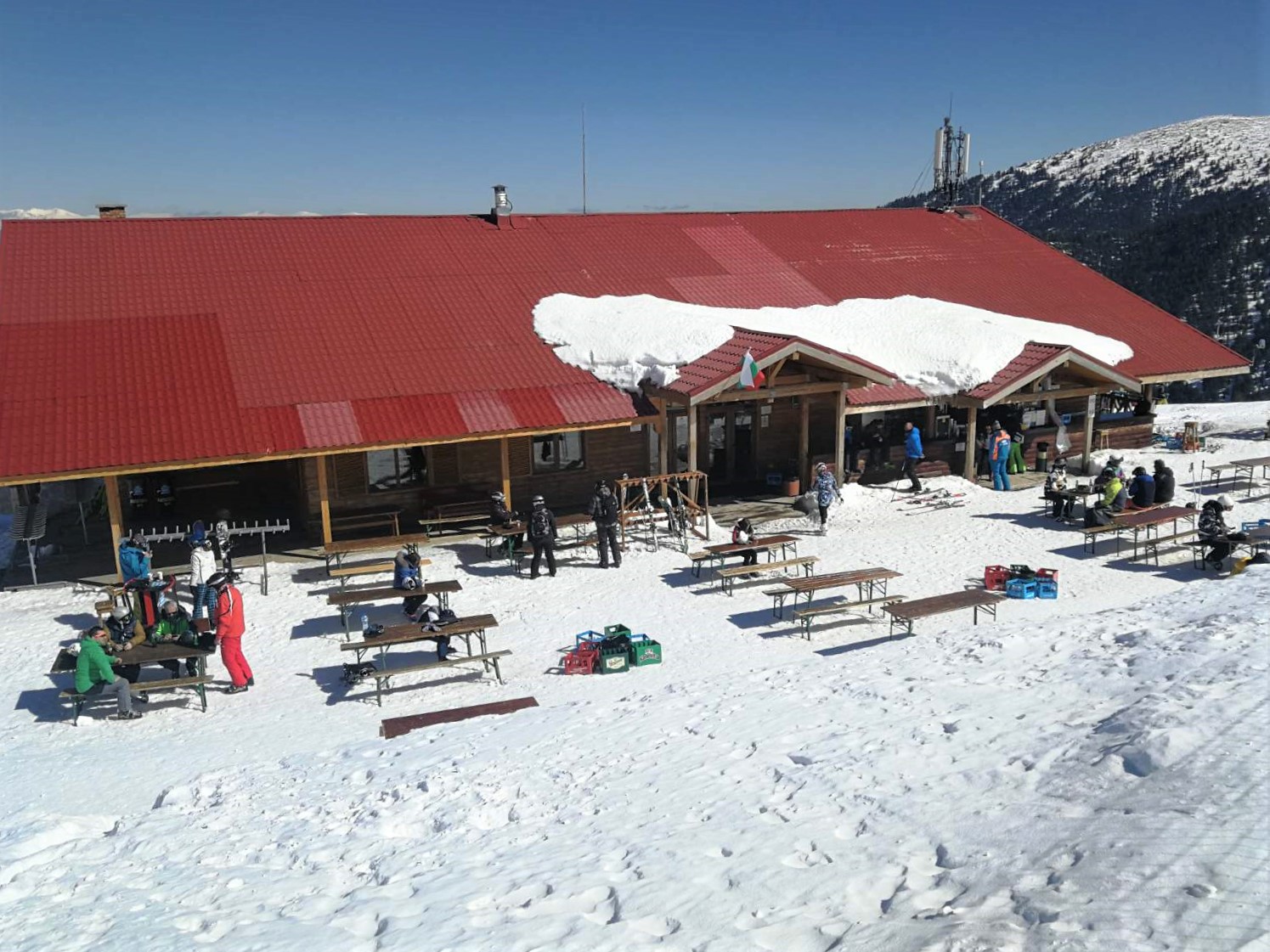 Restaurants are working now! The closing time for all of them is 11 p.m.

The good news is that restaurants in the resort and on the slopes are operating according to the instructions of the health authorities and observing the measures to fight COVID. Once you get tired of skiing, you can stop, take few beers and continue with skiing (if possible :)).

Todorka, Tomba Slopes, and Old Run remain closed for the participants in the World Junior Ski Championship in Bansko. The tournament will end in 3 days, on the 10th of March. After that, these runs will be maintained and will be re-open. Please, kindly note that after the opening of the slopes is very inappropriate for skiers not at the top level to ride there. Flooding with water and deep freezing of the slopes in order to keep it solid for professional skiers resulted in more than 3 meters of ice, which will probably melt not earlier than August. 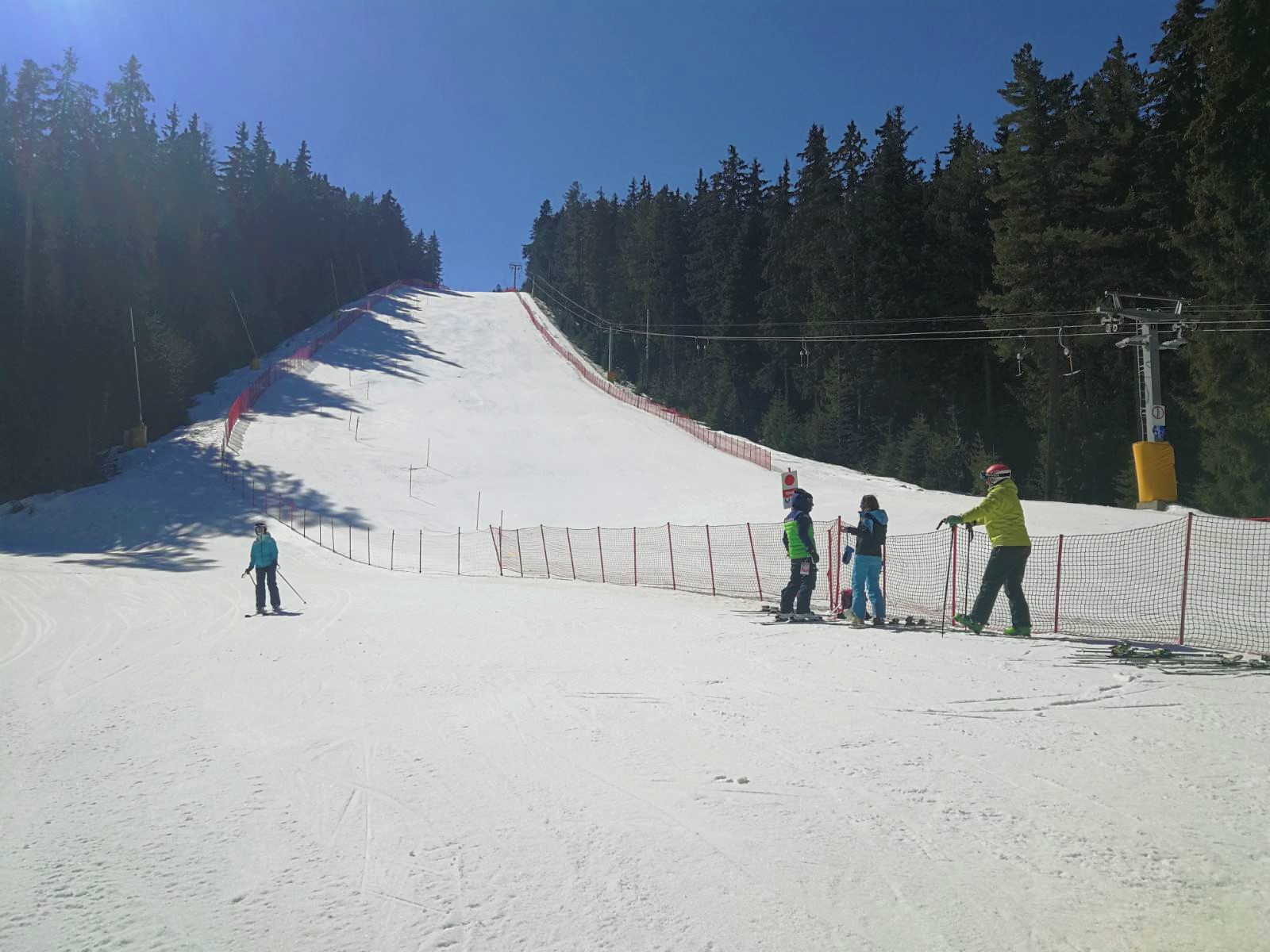 All of the other slopes that worked so far have been in a good condition as well this week. One of the slopes on Chalin Valog and one of the sleeves of the Ski Road never opened this season. There were no queues today. Waiting time everywhere is less than 5 minutes. 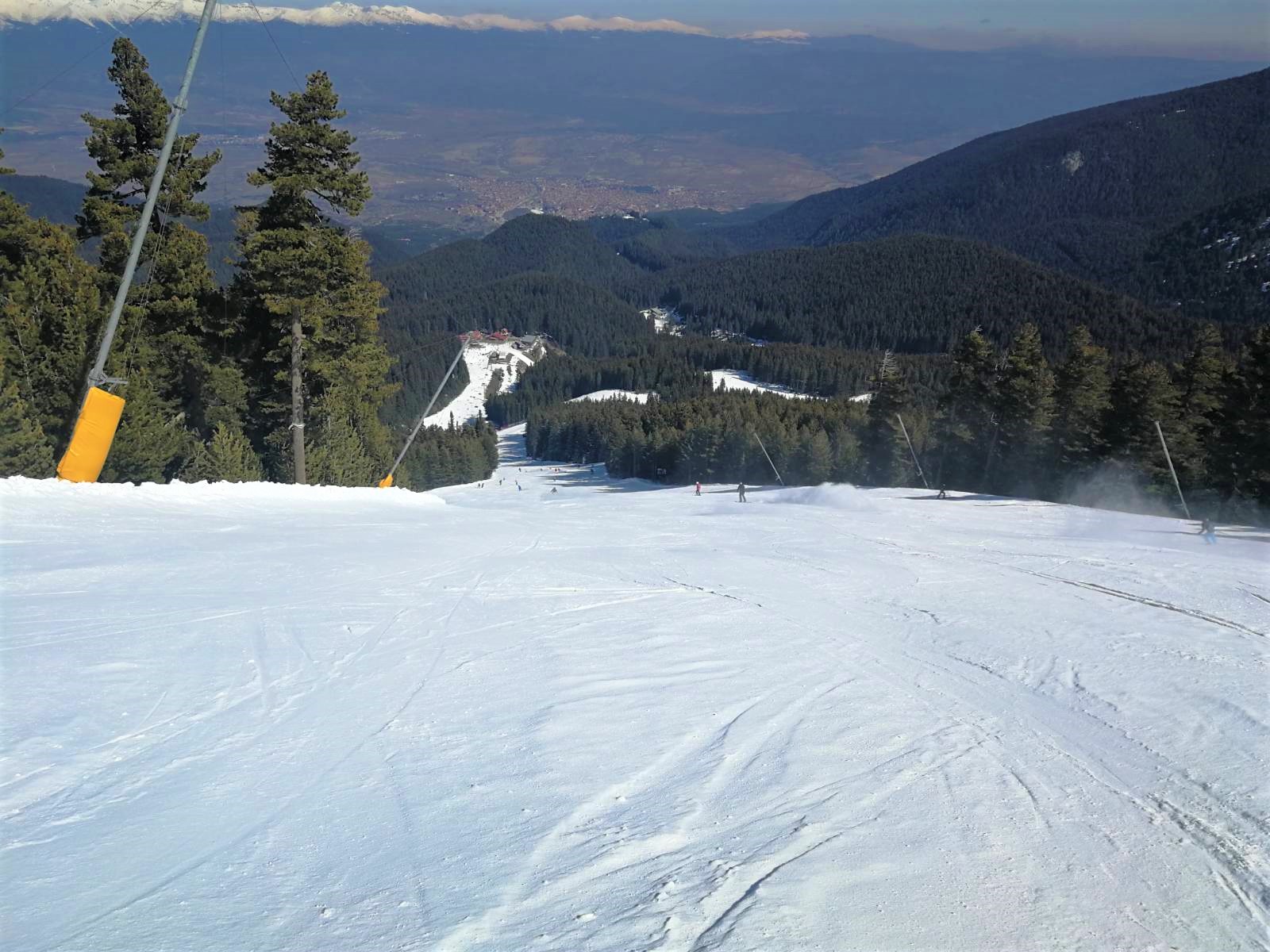 With a vehicle, you can reach Shiligarnika, but not Banderishka Meadow. it will remain a zone closed for cars until the end of the World Junior Championships.

Here is another reminder: please, don’t go off-piste! There is no new snow cover, but as stated on the official site of the resort, going off-piste is forbidden! 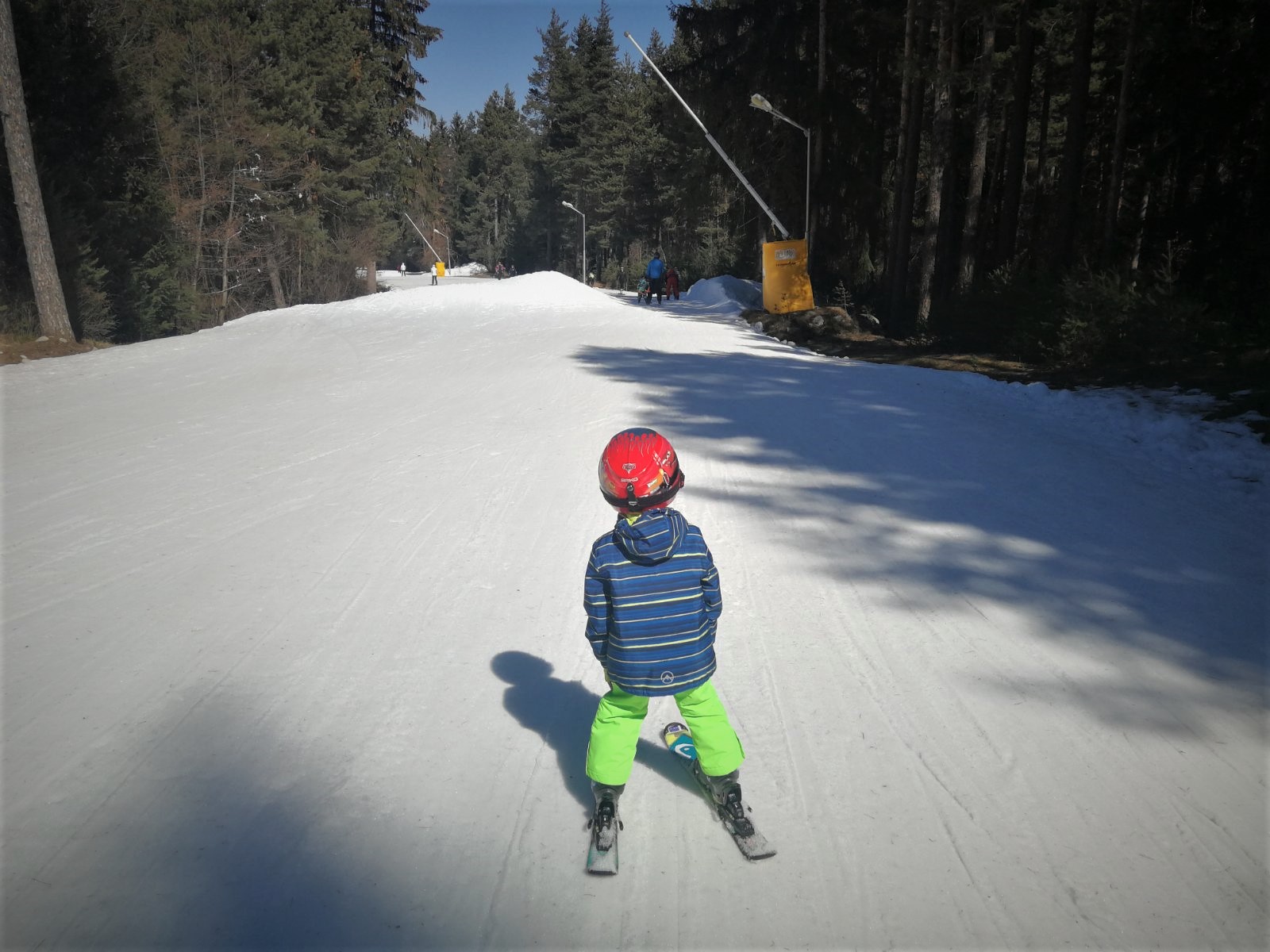 Here is some Monday Motivation: One of our youngest skiers going down the ski road after just one lesson for improving.